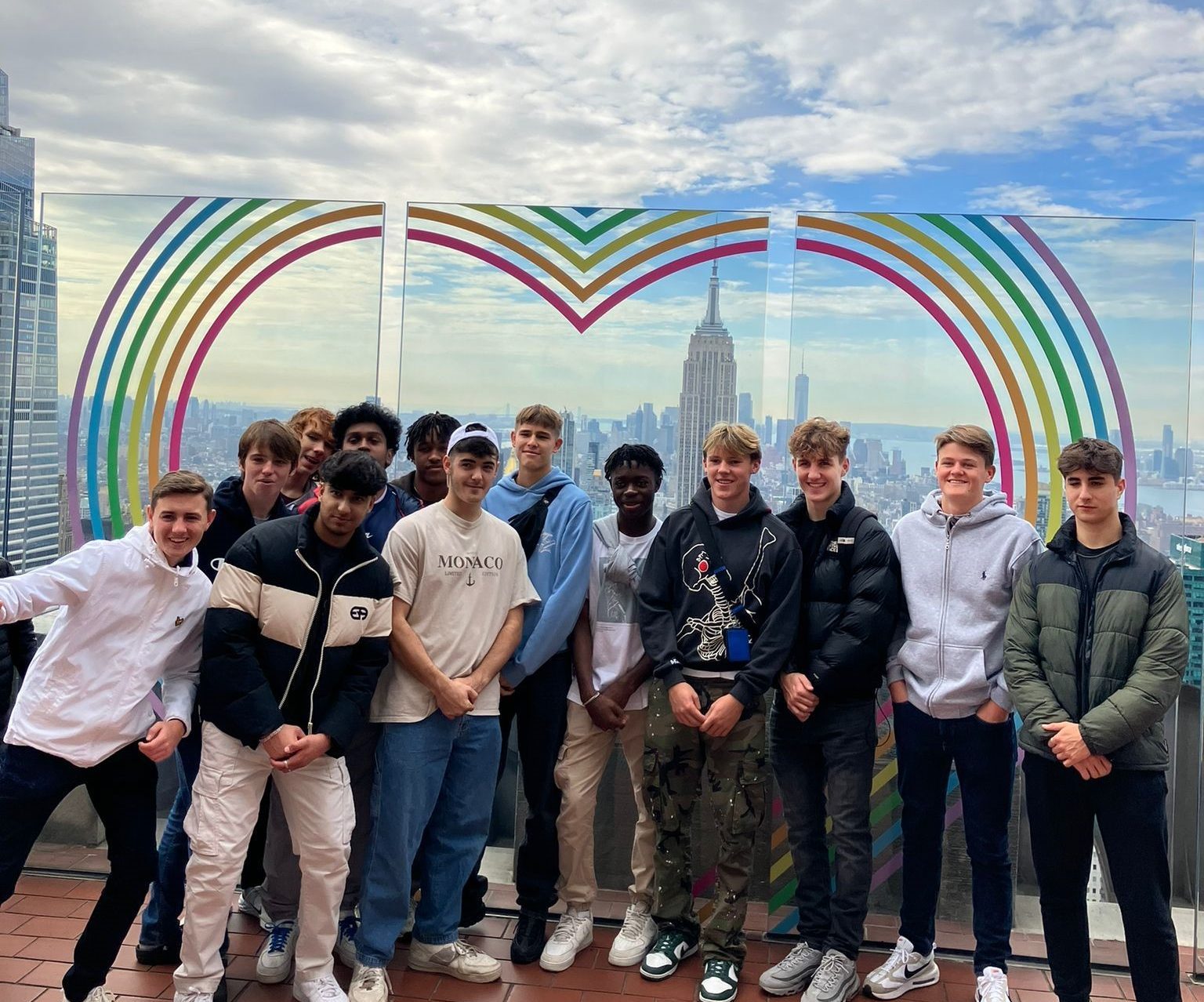 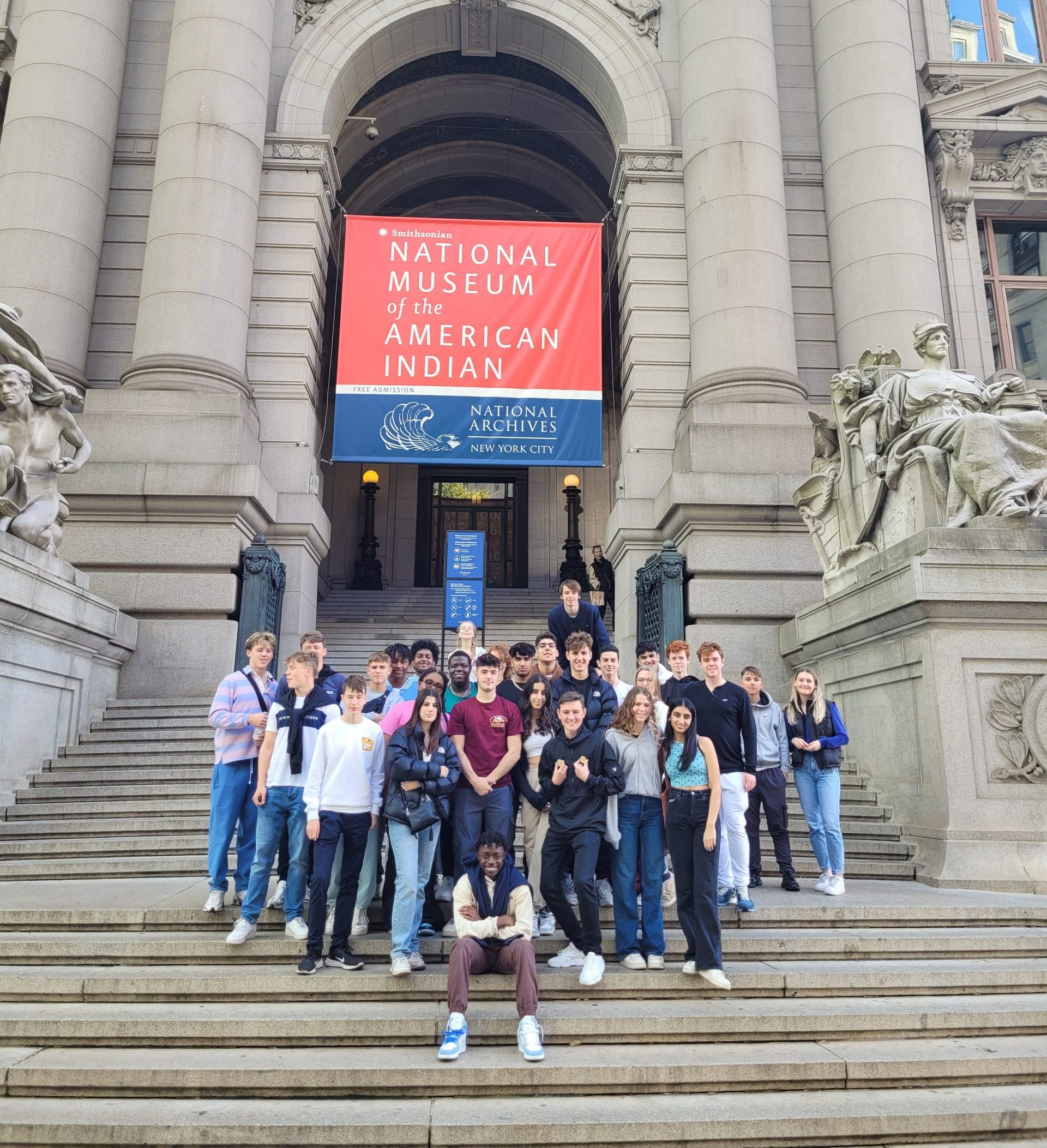 The Economics Department were thrilled to return to taking international trips this year, and travelled with a group of excited A Level students to New York City over the half term. The students took in all the city has to offer, and here describe the trip in their own words with additional highlights from Upper Sixth student Ekaterina Ivanova.

“New York. The city almost synonymous with the American dream. A centre of business, culture and sport.”

To see New York was a dream come true for us all. Having arrived safely at Newark Airport, we rode the coach into Manhattan to the Alabama 3 theme tune of ‘The Sopranos’. We checked into The New Yorker Hotel on 8th Avenue and 34th Street, a 40-storey building with amazing views of the Empire State and Madison Square Gardens. Outstanding weather followed us for our visit, and the warm autumn sunshine made this great city even more atmospheric.

Ekaterina says, “Looking at New York from the 70th floor of the Rockefeller Centre allowed us to see a bustling agglomerate of crowded skyscrapers, with the One World Trade Centre, One Vanderbilt and Edge like beacons to guide the tourist’s confused gaze. The Empire State Building was just a few blocks away, and the Statue of Liberty stood barely visible in the haze. However, on what kind of trip to New York does one not see the Statue of Liberty up close? We couldn’t miss this chance to see the city symbol so, after soaking in the 360 view of the Big Apple, we got a cruise around New York Harbour and sailed up to it. Although the Statue was a bit smaller than we imagined, it was still exciting to have been so close to what many associate with being the symbol of America.”

In the heart of the New York streets lies Times Square, a vibrant hub of activity, from the hotdog sellers to the tourist megastores. The streets were peppered with quintessential snapshots of New York, from appeals from the homeless, to the aromas from the street vendors and the subway. Our experience of New York led us to the hotdog stalls, the burgers of Hard Rock, the seafood of ‘Bubba Gump Shrimp’, and the Italian delicacies of a small Italian bistro S barro. We also must not forget New York’s famous $1 slice (of pizza), which was as you would expect: full of grease and grime, emblematic of the American diet.

Our evening entertainment gave us a sense of American Culture, seeing an ice hockey match between the New York Rangers and the Anaheim Ducks at the world-famous Madison Square Gardens and ‘Wicked’ at the Gershwin Theatre on Broadway. Ekaterina said, “The Rangers game was very show-like, a quintessential part of US sporting events, and the emotions of the Rangers fans, fuelled by the organ tones between every few points, made it impossible to stay impartial. We felt so immersed in the match that we chanted at the top of our lungs to support Rangers, and celebrated their spectacular 6-4 win.”

On our walking tour of the Financial District and Wall Street, we saw many icons of the Business World including The World Trade Center, Ground Zero (where on 11 September 2001, 2,996 people died in the terrorist attack) and the famous Charging Bull: the symbol of capitalism.”  Ekaterina said, “Although we managed to get pictures with the Fearless Girl, we were unable to get past the crowd waiting in an hour-long queue to get a photo with the Charging Bull, or, in reality, two queues – one with the front of the bull and another with more desperate tourists ready to take a photo with its behind!”

We also took a guided tour of the United Nations Headquarters allowing us to hear a snippet of a discussion on UK fiscal policy. We packed a lot into our few days in New York. Each moment of the trip was a unique experience. It all made for a once in a lifetime trip and our whole group would like to thank Trinity school for giving us such a unique opportunity to enhance our learning.

“Many of today's students are visual learners and as such a school trip – like this to New York - lets them touch, feel and listen to what they are learning about. This undoubtedly, helps them build on classroom instruction, gain a better understanding of topics, build cultural understanding and tolerance. Finally, a visit to the ‘The Big Apple' shows our students to worlds outside their own with unlimited imagination.”