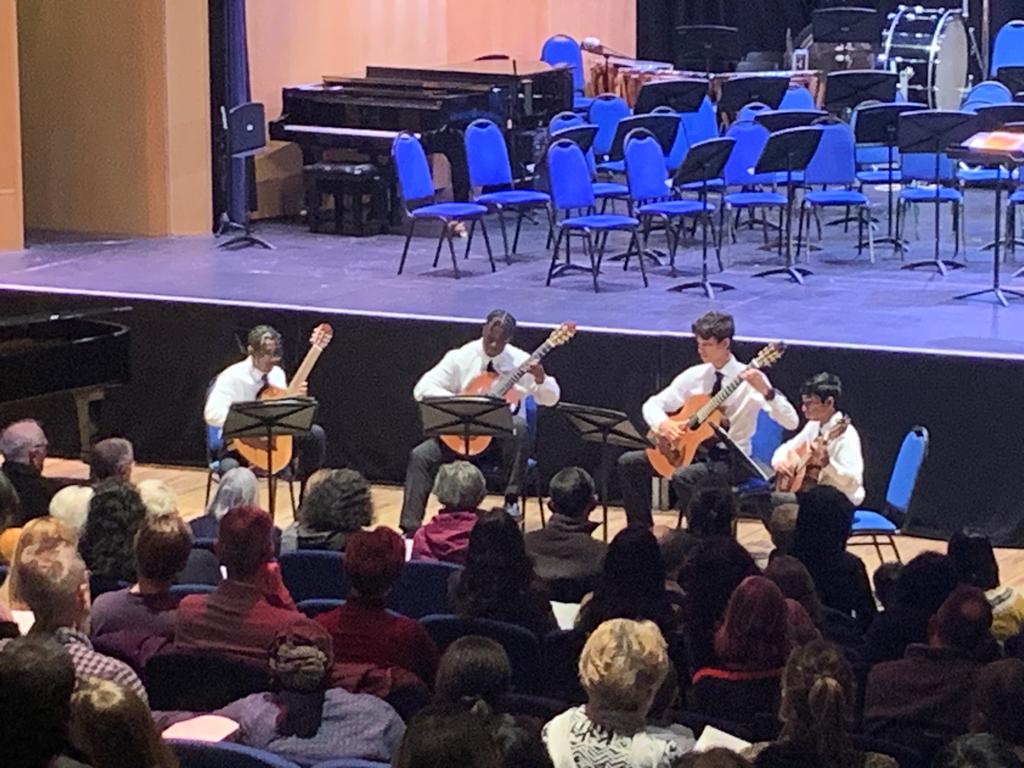 We were delighted to welcome a large and enthusiastic audience to the Trinity Senior Gala Concert this week, to enjoy a variety of outstanding performances from our talented musicians.

The concert featured the school’s more advanced instrumental and choral groups, and the evening began with a rousing rendition of Mussorgsky’s ‘Night on a bare mountain’ by the Symphony Orchestra. This work is composed for a large orchestra, and it was exciting to hear instruments such as the harp (played beautifully by Andrew Ah-Weng) and the tubular bell (delivered calmly by Jasper Bew).

Two talented young violinists from the First Year were playing alongside some of Trinity’s very best players in the Symphony Orchestra but seemed to take it all within their stride. Georges Wright said, “The older players were all very welcoming and helped us to feel comfortable playing alongside them. It has been a busy week with rehearsals and a concert for local primary schools, but it was very exciting to finally perform the piece.” The other First Year student Lucian Joshi agreed, “It wasn’t too stressful, until I realised my parents had surprised me by attending! It was going really well until I accidentally skipped a line…but I think I recovered!”

The second half of the concert opened in similarly spectacular fashion, with a rousing Toccata in D minor by J. S. Bach and a thrilling and playful ‘The Acrobat’ with Upper Sixth student Rohan Lall taking the famous trombone solo part.

Rohan said, “The Acrobat is a piece I learnt when I was younger and it’s a classic in the trombone repertoire, so it was especially enjoyable to have the opportunity to perform it with an ensemble. I felt a little nervous beforehand but mostly excited because the audience was really friendly, and I felt the performance went very well overall.”

Smaller groups performing during the concert included the fantastic Senior Percussion Ensemble, who played ‘Samba A La Turca’ after Mozart, and the cultured Guitar Quartet, with works by Albeniz and Gary Ryan. Each player in these groups played brilliantly at an advanced level and the results were most impressive. The contributions from the Concert Band and Big Band 2 rounded off the evening and were also thoroughly enjoyable.

The instrumental highlight for many was the world premiere of Roy Chilton’s Concertino for Guitar and Strings. Roy retired from teaching guitars, double bass, and jazz at Trinity in the summer after many years outstanding and dedicated service. Our guitar department thrives today in large measure due to Roy’s unstinting championing of the instrument. As a parting gift he presented us with a highly attractive and evocative work for guitar solo and strings. We are fortunate to have some highly talented young guitarists and none more so than Joseph Jenkins, who gave a most polished performance.

The choral items included the Girls’ Choir, the Chamber Choir and the Consort. The new intake of Sixth Form girls includes some really promising singers, and it was lovely to hear them singing at school for the first time. Special mention must also be made of William Lewis, who sang a memorable baritone solo in The Dying Soldier.

At the end of the concert, it was heartening to reflect that the evening had only showcased half of the school’s groups: the junior music groups can be heard in next Wednesday’s New Generation Gala Concert.