Student Trip to Houses of Parliament 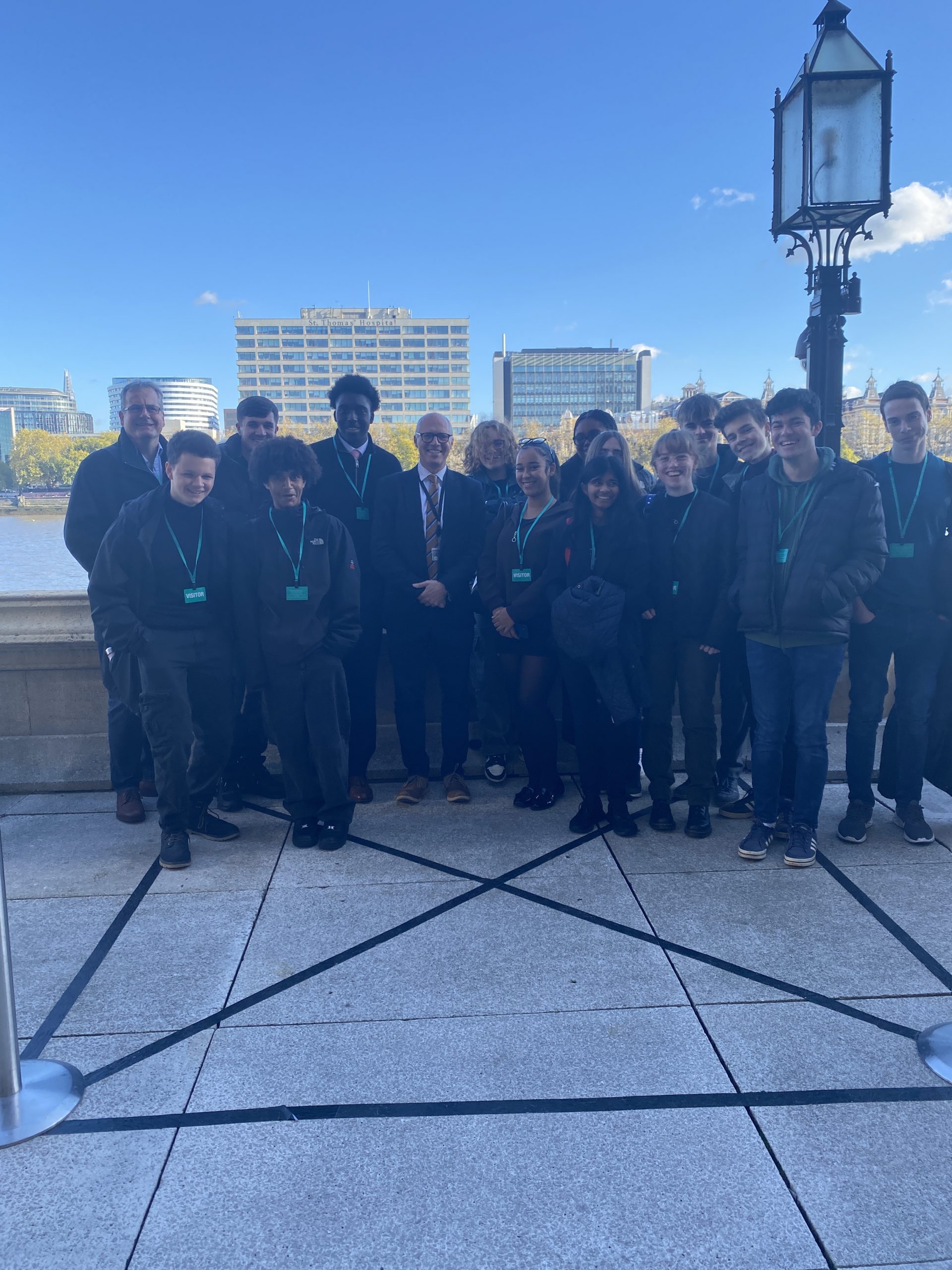 A group of Sixth Form Politics students and student members of the Law Society recently travelled up to London to visit the Houses of Parliament. The students were also delighted to meet with Trinity Alumnus Chris Shaw (Class of 1986) who is currently working as a clerk for the Foreign Affairs Select Committee.

Lower Sixth student Jacob Brome, who is studying Politics A Level, attended the trip and says, “Marching through the streets of Westminster side-by-side with my comrades, we were all equally excited to finally enter Parliament, as over the last term we have studied political ideologies and democratic processes which are rooted within parliamentary practice.

“Arriving at Parliament there was a sense of gravitas, an overwhelming emotion arising from the realisation of the long-standing traditions which have moulded every aspect of our lives. We were then guided through the seemingly confusing hallways of Parliament and many of us were shocked by the religious artwork which is woven into 19th-century Gothic architecture. Throughout the tour, we discussed the democratic process of scrutinisation, that those who hold government positions partake in, and how the layout of Parliament itself is conducive to a progressive debate.

“Once our tour was completed our group reunited for a lesson in the various voting methods. This was followed by a student election where we implemented those very voting methods to find the most capable student prime minister. However, the elections reflected the political climate we are experiencing today – lots of hope and enthusiasm coupled with weak economic policy!

“We then moved on to meet with Chris Shaw, a Trinity Alumnus, who is a clerk in the Foreign Affairs Committee. Chris navigated us through the tribulations which he is posed with but also explained the many benefits associated with having not just a parliamentary role, but a role within politics generally. It was an honour to speak with him.

“After our trip to Parliament we marched on, with Mr. Hutchings leading the way, via the Supreme Court where we unable to see any electrifying and engaging cases this time – to the Old Bailey. Once entering the Old Bailey our excitement resided into intrigue as we were shocked by the gloomy atmosphere within the judicial building. Many of my peers, and myself included, are aspiring barristers and the opportunity to view criminal cases in action was highly informative.

“To conclude I would like to give Mr. Hutchings, Ms. Poole and Mr. Timm a huge thank you. As the Politics and Law trip was an amazing experience, allowing myself and others to have tangible experiences to apply to our studies.”

Lower Sixth student Sophia Wan is also studying Politics; here is her account of the trip:

“We travelled up to London shortly after the rather topical appointment of Rishi Sunak as PM; visiting the chambers where history was (and is continuing) to be made was absolutely fascinating. I, along with many of my classmates, probably had not realised that the chambers of Parliament were in fact, rather small. While the Commons was closed (due to a Youth Parliament Assembly), the tour of Parliament included viewing a Green Paper from the Lords and standing in their chamber. While stapled sheets of green paper do not sound terribly exciting on their own, A Green Paper is an incredibly important document including relevant information and context about new laws being debated. This was a personal highlight of the trip (although I’m not sure my classmates share the same sentiment!)

“After a short talk on voting systems – a brilliant practical demonstration was given by some Politics students standing in as MPs for a fictitious nation. I thoroughly enjoyed being PM although unfortunately, my power was theoretical and my time in office short. As young adults being eligible for the vote next year, it was insightful to see how influential our vote may be and why our voting system isn’t as democratic as we think. 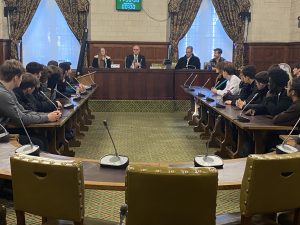 “We then heard from Chris Shaw, a clerk of the Foreign Affairs Select Committee, who told us about his role in government, and were able to sit in the Westminster Hall (or the Grand Committee Room as it’s officially known), where many ‘grillings’ of certain individuals have occurred. Being allowed to sit in a room which we’ve only talked about was, for the lack of a better word, ‘cool’. As a Politics student, the course (and teachers) can only teach you so much given the time and information they have, so it was really helpful hearing about their role within parliament. I enjoyed hearing Chris’s opinion on how effective committees were when scrutinising (and often criticising) the government. It was all closely related to topics we had just covered in class. After finishing his talk, we had a brief walk around the terrace before moving from Westminster to the Charing Cross for lunch.

“The next part of the trip was the most useful for students aspiring to have legal related careers – another short (somewhat) walk led us into the city where Royal Courts of Justice and the Old Bailey are based. Our guide was a journalist named Tim, who took us around multiple courtrooms so we could sit and observe a trial and most of us were able to watch lawyers in action in a criminal court setting, something not all people may get to see in their lifetime.”

“We were even lucky enough to sit in a Select Committee room and were given a talk by a chair of one of the Select Committees. He gave us an insight into how to get a job in government and the jobs available, as well as describing some of the roles he’s had. This trip was perfectly timed as we were learning about Select Committees and their role in the function of scrutiny.

“My highlight was the trip to the European Courts of Justice and Old Bailey as we were given a talk on the role of a barrister by a reporter. We all had a really good time and I envy the Fifth Year who may be lucky enough to go on this trip next year.”