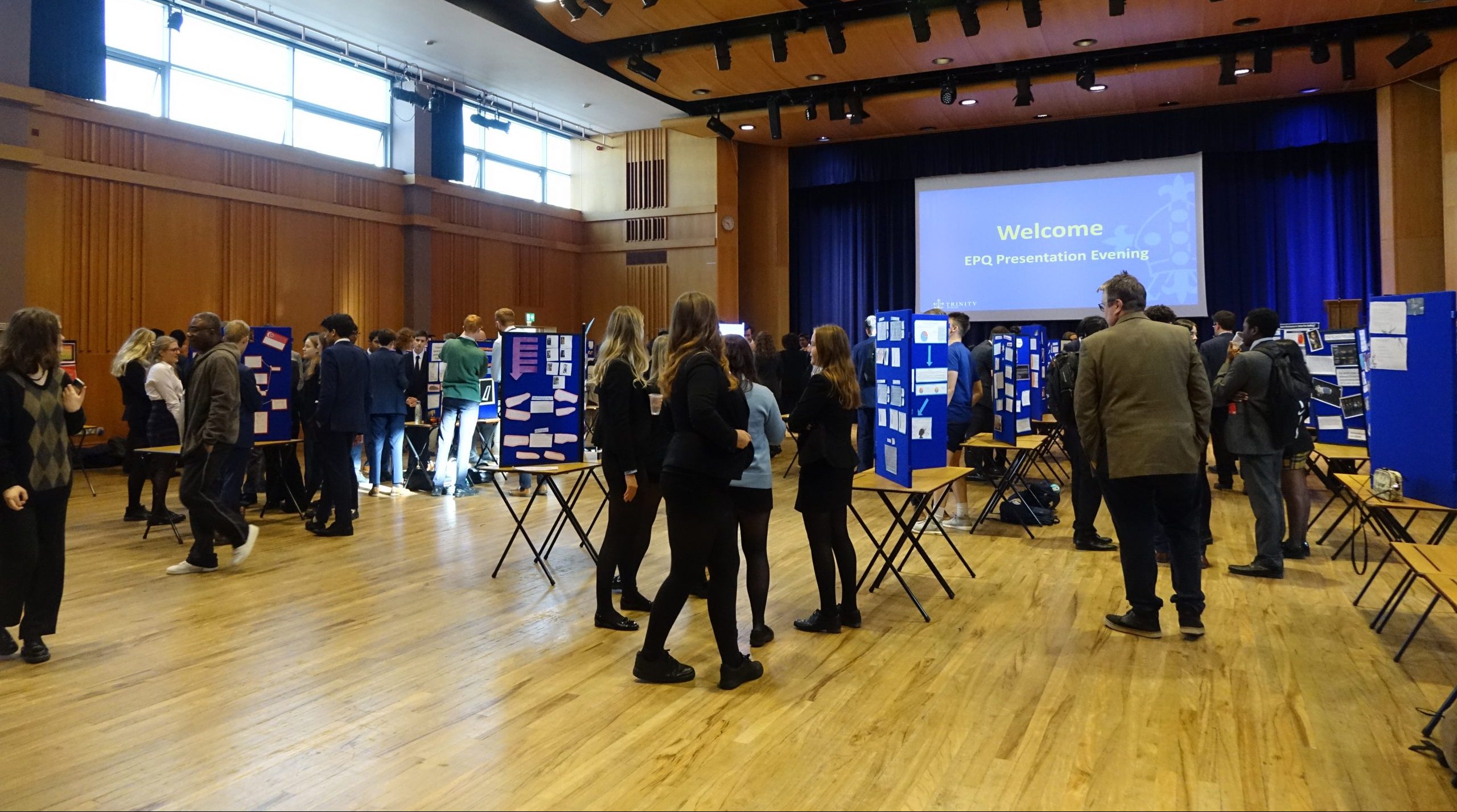 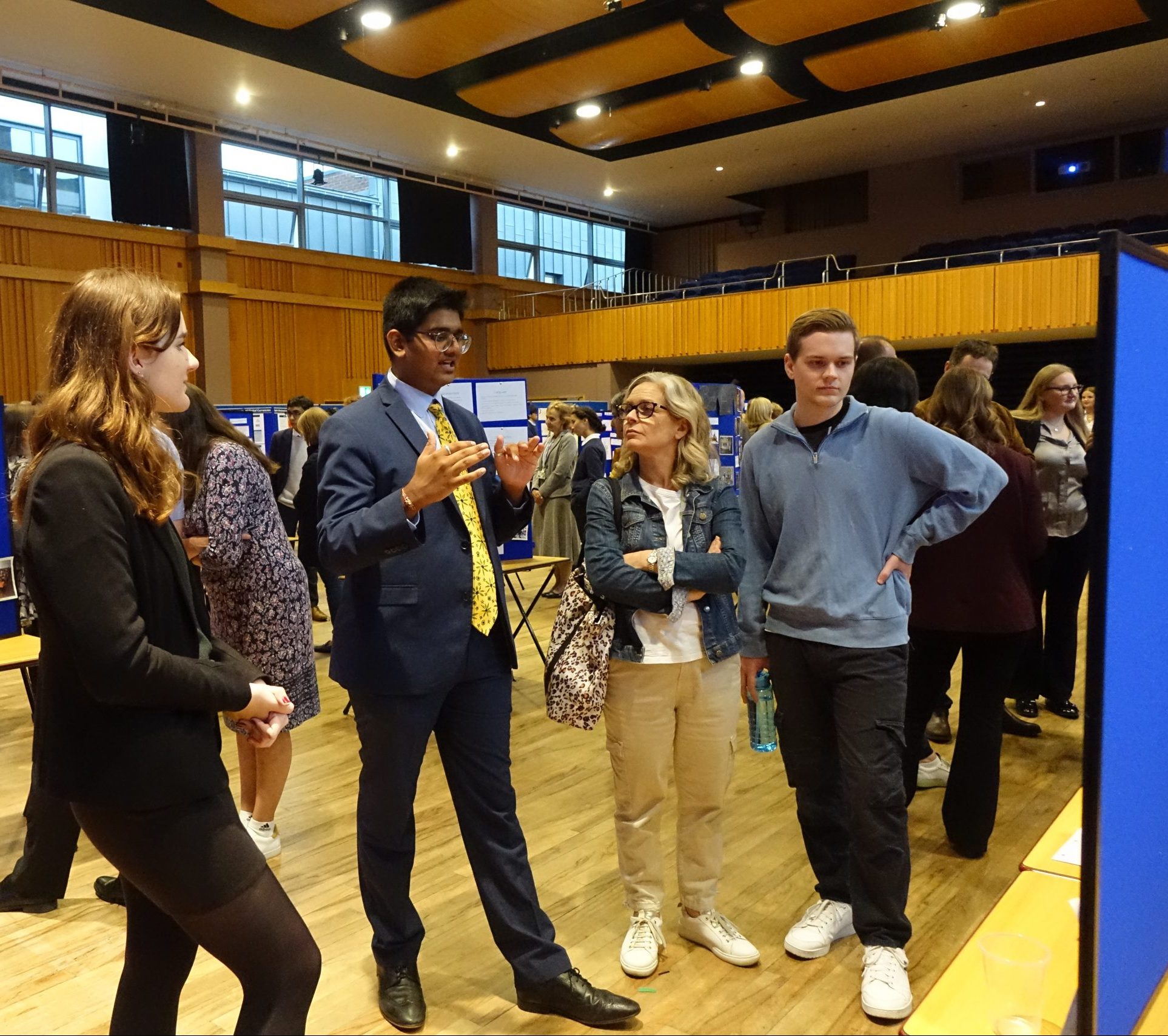 Last week, an impressive 52 members of the Upper Sixth presented the findings of their Extended Projects in a stimulating event in the Trinity Concert Hall. The presentations addressed a fascinating and varied range of significant social problems from the Climate Crisis and institutional racism through to Body Dysmorphic Disorder. There were several ‘artefact’ projects including a play addressing the stigmatisation of obsessive-compulsive disorder (OCD) as well as the building of a drone designed to test the advantages of neural learning networks.

Anish Shah (left) completed a project entitled, ‘Is the “contact theory” or the “conflict theory” more prevalent regarding social, ethnic, and religious diversity in India?’. He reflects on the experience, “From start to finish, I was able to fully control my project, and adapt it to my interests, which made it so engaging. My deep fascination with my heritage has led me to investigate diversity in India, and whether the proximity of such a variety of cultures, religions and ethnicities acts as a catalyst of tension or a driving factor for progress. I really enjoyed presenting my project as I was able to share the knowledge I had found whilst also stimulating ideas and arguments with many different people. Whilst at points the EPQ was difficult, it has taught me to be resilient and diligent, and I have learnt a lot across the process.

Orrin Blair attended the previous year’s EPQ evening while she was in the Lower Sixth and this sparked her interest in taking on her own project. She says, “I wanted to choose a topic that would pull together my three A Level subjects alongside my personal interests in both genetic engineering and climate change. My EPQ posed the question ‘Would the resurrection of the woolly mammoth, in an attempt to positively affect climate change, be feasible and is it ethical?’ I enjoyed reading articles and scientific papers which allowed me to draw my own conclusions, but I was initially nervous about presenting it to parents and other students. I was delighted with the response I received and found that I enjoyed being asked questions and explaining how I had reached my conclusions and to outline some of the genetic engineering processes that would be used in order to ‘resurrect’ a woolly mammoth. The EPQ process is thorough and takes time, but it is extremely rewarding – it has strengthened my desire to study biochemistry at university – and is one that I thoroughly enjoyed.”

Freddy Matta tackled the question ‘Which rocket engine technology provides the best balance of efficiency and complexity?’, of the EPQ experience he says, “I thoroughly enjoyed the level of depth and research involved in the EPQ and learnt a great deal about rocket engines; from their minimal impact on the environment, the many disadvantages of a Mars colony and how engineers push the limit of physics to really get the most out of their rocket engines. Writing a 5,000-word fully referenced essay was something I had never done before and although it took many iterations, eventually I had a paper I was very proud to have written.”

David Fitzpatrick, who is interested in applying for Medicine, completed his project on preventing sudden cardiac arrests in young athletes. He says, “I was lucky enough to interview a sports doctor who really brought the subject to life for me. At the EPQ evening, it was slightly terrifying to be questioned by a parent who was a doctor, but in retrospect, I really valued the experience and hope it will help me approach medical school interviews with greater confidence.”

The aim of the Extended Project Qualification (EPQ) is for students to become independent learners who develop the competences required to know they have become experts in their chosen field.  A huge amount of work went into the EPQs, congratulations to students for their hard work. 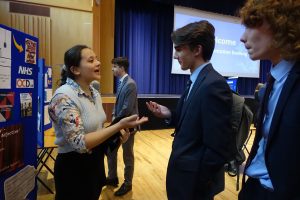 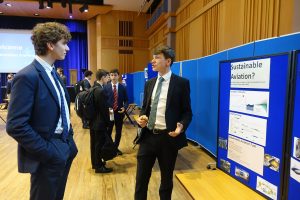 It was a real joy to see students deliver their findings and find themselves challenged in return. During the presentation evening, I spotted Doctors scrutinising our medics, Japanese literature enthusiasts engaging with a project on comparative literature and Mr. Flanagan grilling engineers on the best way to test a Hydrofoil. We hope to see this year’s Lower Sixth take on similarly ambitious research and undergo equally worthy journeys.