Last term, the school’s musicians managed to organise numerous concerts; giving pupils the opportunities to play solos and in groups.

Unfortunately it was not possible to have live audiences in school but these concerts were filmed and broadcast to the community via Youtube.

These concerts often take a while to edit and we are delighted now to be able to broadcast the final one: the Electric Guitar Concert, which took place just before the end of last term. 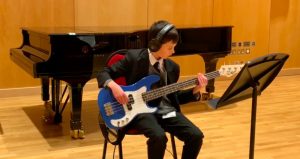 “Well done to all involved, and huge thanks to Mr Rowland,” says Mr Reck, Head of Guitar.

See below to enjoy the great playing from our young musicians, including well-known pieces by James Brown, Chuck Berry and Nirvana!