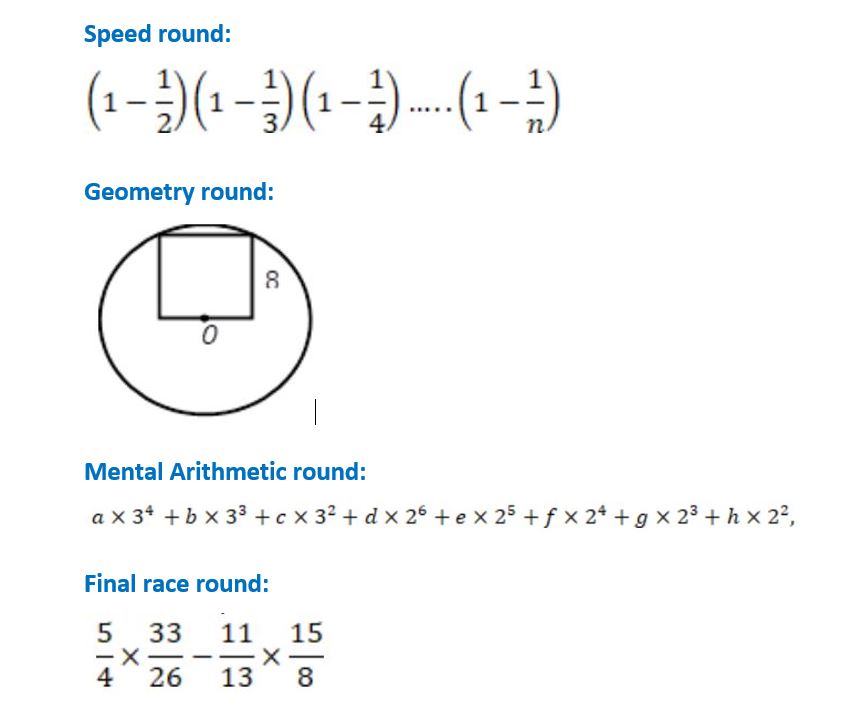 A group of students recently took part in the first match of the Hans Woyda Mathematics competition, a hotly contested battle between the finest mathematical brains from more than 60 London schools. Each team consists of one student from the Third Year, Fifth Year, Lower and Upper Sixth Forms who have to complete difficult maths problems under timed conditions.

The first foray was an away match at Wilson’s school in Wallington. Here Mr. Barlow, Teacher of Maths, provides the nail-biting match report:

“Things started pleasingly enough – the round one questions rely predominantly on speed – 30 seconds for example, to simplify the problem (#1 on the left). [Can you spot the trick?!]  At the end of this round, both teams had 10 points.

“Round two consists of geometry questions, and the teams had just 90 seconds to find the area of this circle (#2 on the left). Third Year student Naku Debebe and Fifth Year Finn Evans got the answer quickly enough; luckily for us, Wilson’s did not! Both teams scored on the next geometry question, but the later ones were too hard for either team to solve – so by the end, we had moved ahead by two points!

“The Mental Arithmetic round was not high scoring for either school (7 apiece), so we went into the Team challenge feeling a bit more optimistic than when we had arrived.

“The team had to express all the numbers from 100 to 120 in the form (#3 on the left). Upper Sixth student James Burn deployed our practised tactic of dividing up the task among the team and we thought we were on a roll…only to discover that quite a lot of our answers were wrong! We were now only one point ahead.

“In the calculator round, Lower Sixth student Sumant Dinesh stole two points from Wilson’s, but they took them back on the Fifth Year question.

“The algebra round allows teams to ‘steal’ points from their opponents’ questions. We successfully defended all our own and stole two more from Wilson’s – and went into the race round with hope in our hearts!

“The race questions allow 60 seconds, but are won by the team that (correctly) gets the answer first.  How long does it take you to do this one…(#4 on the left)? Naku solved this in five seconds, prompting his opposite number from Wilson’s to exclaim, “Just how?!?”.  Mr. Barlow hadn’t even finished reading the question. We were now striking like lightning and the questions fell to us quickly.

“The final score – Trinity 46 and Wilson’s 31. A triumph! Next stop, Wallington Grammar, then Whitgift…”

If you would like to send your answers to any of the above questions to Mr. Barlow (rab@trinity.croydon.sch.uk), he would be glad to mark your answers!